Translating solfege and Portuguese into Bb

Marino called me as he said he would with instructions for the roda de choro on Tuesday. I couldn't understand a word over the phone and tried to explain in Portuguese that I would need him to spell the name of the bar or text it to me. Instead his plan was to meet at a metro station and he would walk me to this mystery place. Marino and I met, both on time, and walked to a bar I realize I still don't know the name of.

The choroes were in a back room around a table with beer and there was no one else in the room. Throughout the night there were a couple of tables with people but the players played mostly for their own enjoyment. Small group, some of which were the same people from Sunday. Ana welcomed me and let me sit next to her. She was a lot friendlier and we chatted a lot. She let me call some of the tunes and we took turns playing the melodies and sometimes little counter melodies under each other. She and Marino gave me an education on composers and players I should listen to. Everyone kept making American jokes with the few English words they knew. I learned that a couple of the players have their own groups but none of them play professionally. Most of them were just retired people playing for fun. Really good players. This seven string guitarist played some choros I called that he hadn't heard before and it sounded like he'd known them all his life. The cavaquinho player was 82 and he played the harmony line in the B part of 'Lamentos' and I started to tear up a little.

We played a lot of tunes I hadn't heard before but I was able to keep up. It was like translating from three languages. They would tell me the key of the song in portuguese and in solfege and I'd have to translate that into my language plus transpose into my key. "Si bemol" was B flat but for me was C. Just takes my brain a couple extra steps. We played Brasileirinho, Vibracoes, Vou Vivendo, Naquele Tempo, all the hits.

Marino invited me to a rehearsal for his group, Choro na Veia, at his place. Story to come, but off to go see what folia this city gets into for carnaval! 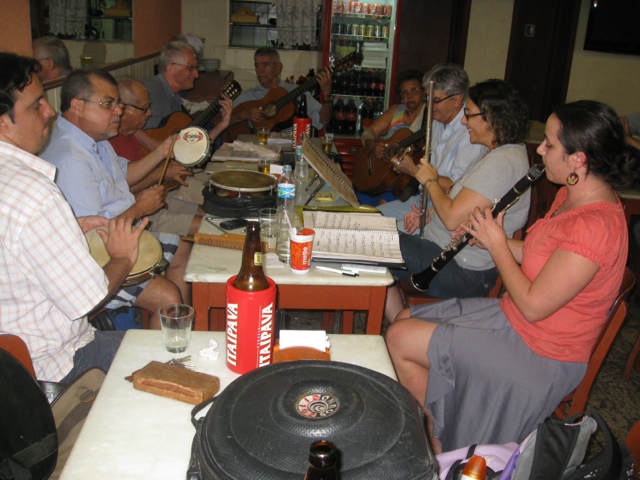