Like I was saying, nothing here happens according to plan, but that's the best part. Every little moment here has happened for a reason and has been part of a greater mysterious plan that always works out. I am learning to just let these moments happen. I'm not saying that if I just sat on my ass that would someone would give me a trip to Rio and make all of these opportunities happen. I'm putting in the work too and putting myself out there. I put the word out to Jacare that I was interested in taking drum lessons on my visit. He put me in touch with Nico who is the principal repique player for Sao Clemente. I had a great lesson with Nico who then invited me to play with his bloco which then opened up a whole other world here.

The bloco is called Monogato which Brazilians think is hilarious and I don't really get it. Is it because it sounds like 'one cat' or a play on 'Monobloco'? Anyway, my Portuguese comprehension got a partial bar name on a partial street name. Somehow ("it's a mystery!" -Shakespeare in Love) I found them. A bunch of Brazilian guys wearing tank tops that said 'Monogato' hanging outside a bar called 'Bar Gatao,' which turned out to be their namesake. None of these guys were drummers, just members of the bloco who drink beer and hang out. They directed me to the beach where I found Nico and met some of the drummers. There were a couple of Brazilians but the majority were German and French tourists! They've all been in Rio for a few weeks and have been playing with Nico. Erik plays in a samba school in Frankfurt. Entry from Turkey and Kylu from Poland both live in Germany and play samba in Berlin. The French were mostly from Tours and have a group there.

Of course all of my own cultures and languages would come together here in Rio through samba. Everyone spoke a mix of everything. I loved hearing the Germans speak to each other but they usually spoke English with me. The French went back and forth between English and Portuguese but mostly French with each other and with one of the Brazilians who lived in Switzerland. I opened my mouth to speak to them and I. couldn't. remember. any. of. my. French. Oh my god! I tried to just ask where they were from and it came out in Portuguese. I hope that is just a testament to how steeped in Portuguese I've been and how natural it's become. That French better still be in there somewhere though.

We all didn't need to speak much anyway because our common shared language was samba. All really good players. There were only a handful of us so Nico played something else and had me play the calls on repique. I took it as an honor but started to stress out (there it is again) about being the newcomer and not knowing their material. They had a couple guys playing Monogato's own enredo and they kept yelling at me for missing the breaks! But I was trying to get cues from Nico who seemed to be cuing me with eye contact behind his non see-through sunglasses. Again, finally one of those moments when I realized we were having fun and I should relax and enjoy this moment which also led to many other nice moments.

The Germans and I joined Nico with another bloco 'Meu Bem, volto ja!' (my dear, I'll be right back!) A lot of the blocos have funny names sometimes with sexual innuendos like 'It's small but it will grow.' I enjoyed spending more time with Emre and Kilo and dancing to live pagode in the street. We got to join Monogato again for a churrasco, visit Nico's family in the Chapeu Mangueira favela, and then joined Nico at Sao Clemente's post carnaval celebration. I enjoyed speaking to some of the drummers about their emotional experiences from the parade.

All this from telling Jacare I was looking for a lesson, and from him being willing to share a contact. I met up with Emre today to wish him a safe trip to Salvador and we will discuss our future international samba exchange! 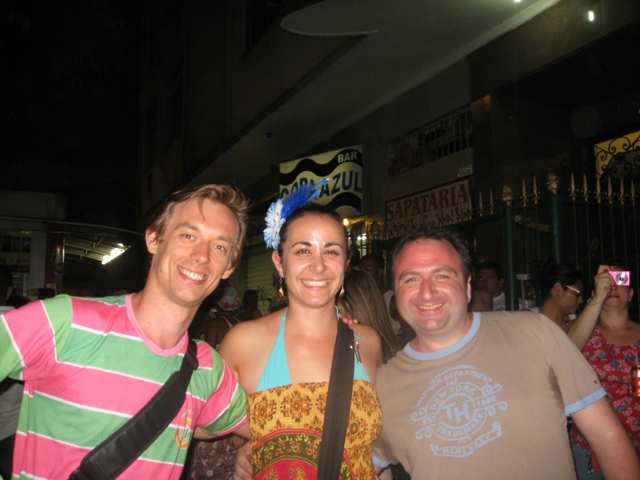 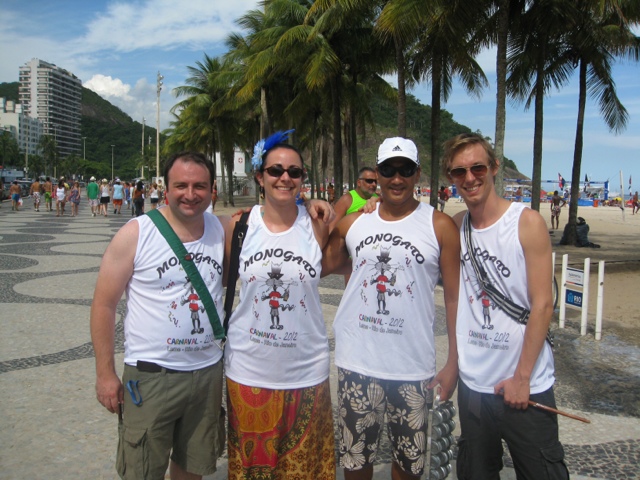