I met up with Jacare and friends on Sunday for a drink. Well I didn't just meet up with them, I found them after mis-hearing the Portuguese street names over the phone, walking way too far out of the way, and creating wide open blisters from my comfy sandals which are not as comfy with my feet swollen to twice their size in the heat. My feet were in so much pain and it became one of the many tearful moments I've had these first couple days. I've just been feeling overwhelmed, lonely, and already mosquito bitten. The last thing i need is feet problems. Tears subsided when I finally found them and had a sip of beer. Carl and I agree beer seems to fix everything here. Also Jacare's sweet friend saw my pain and switched shoes with me for the afternoon!

Jacare was very kind to then invite me to join him at one of his special places where he is welcomed like family, the rehearsal for Bloco Bambas do Catete. He introduced me to the mestres who agreed to let me play just based on his connection to me. Jacare looked at me and just said 'don't fuck up.' They found me a drum and a shirt and and I learned that this rehearsal was actually a full street parade. I was nervous and everyone looked so serious. Tough guys holding cigarettes in their mouth while they drummed. As I looked around, trying to find a spot, I realized there were no other women holding a drum. A few in the front on chocalho maybe, but none near me. I went back to Jacare and Hilda and drank more beer. I was instructed to stand between two caixa players and my matching band instincts told me to remember who I was standing next to and to 'guide right' to stay lined up. There was a lot of yelling from the mestres and the noise of the musicians warming up on the float was disorienting. During a pause the cavaco player started noodling 'Brasileirinho' and it made me smile and reminded me to look around and take it all in. It's my second day in brazil and I'm wearing a bloco shirt and a drum. Very exciting.

Call-in and we were off! I remembered who I was positioned next to as we started down the street and they were no where to be found. In fact, I didn't see the lines anymore. Drummers all mixed up all over the place. Huge crowd around us screaming and dancing and passing through the bateria. Total chaos! Dropped my marching band instincts and picked up my pep band ones. Played my heart out and tried not to get trampled. Soon it's dark and starts to rain. And then pours. Thank goodness for the borrowed havaianas which are more suited for puddles. And then lightning. Huge bolts across the whole sky. I thought 'what are the things to remember in a lightning storm,' and thought that having a big metal can strapped to your body is probably not one. My next thought 'I'll just count the seconds between the lightning and thunder.' Well unless the thunder is playing on 2 and 4 I couldn't hear it. Next thought 'just stand by someone with a bigger drum!' No one else seemed to be phased except for the poor surdo players whose skin heads were soggy. The rest of us pressed on for what seemed like an hour, parading along the street I had just been crying down that afternoon. I knew my hands hurt from playing non stop ride, and my poor flat feet hurt from the havaianas, but I couldn't feel anything except the rain on my face and the rush of drumming in Rio. Fireworks went off over our heads and on the street in front of us.

I got some thumbs up from a bunch of the guys at the end and went up to thank all the mestres who were very sweet. More beer helped the pain coming back into my feet. I think my plan is to find a balance of enough beer to keep me going, but of course not so much that I am not aware of my surroundings. It has given me more confidence in Portuguese and has helped me ignore the little worries that keep creeping into my head. Don't worry Mom I'm being safe! 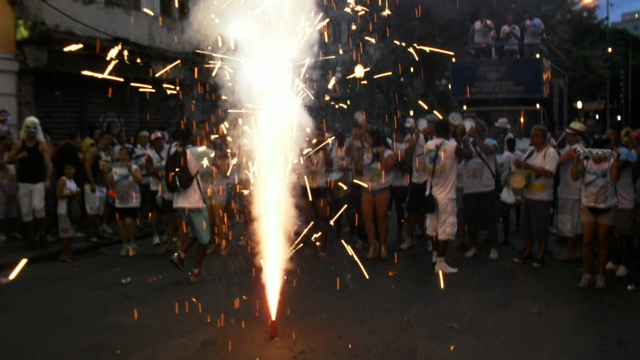 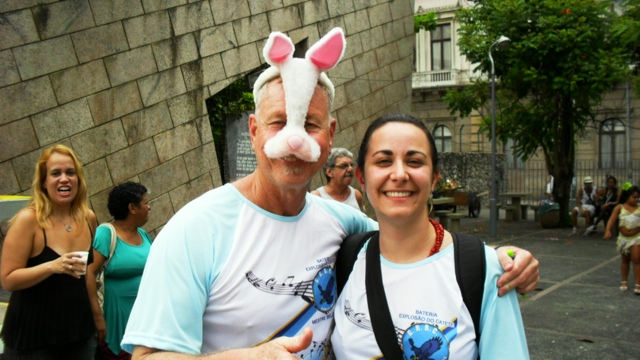 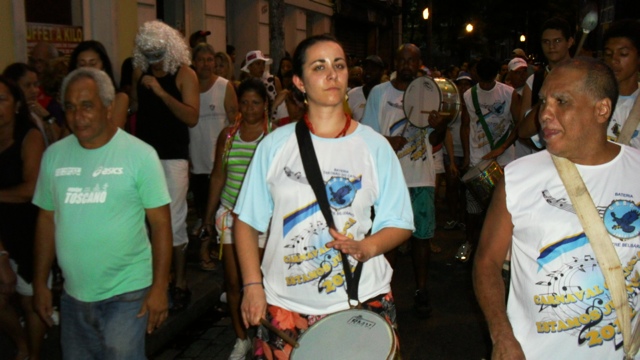