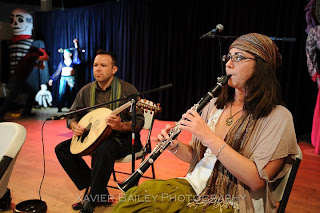 It has been a challenging and exciting month of saying so long to my comfort zone and sitting in with new musicians and musical styles.

I was invited by a friend to play clarinet for a Spring Equinox celebration complete with yoga class and a belly dance performance all to live music.  They wanted a clarinetist to accompany a snake dancer and sit in on some of the other numbers.  They only had one run through left so I showed up feeling nervous to be playing on the fly and curious to find out if this snake was live or fake. At the centro getting ready were dancers, doumbek drummers, a mandolin, and an oud player.
I approached two string players first to try and get the low down on what was happening.  Turns out they weren’t playing any actual songs, but just improvising background music.  I asked if they could show me some of their melodies, or tell me which keys or scales they planned to use so I might be able to join them.  The oud player replied “You must be like one of those real musicians, huh?”  I learned there wasn't exactly a plan.  I was going to have to let go and go with the flow if I wanted to be able to hang.  I spoke with a couple of the drummers who told me to just play whatever I felt like whenever I felt like.  Not sure if these guys realized that some of my music background includes marching band and classical music training.  Just making it up doesn't come naturally to me.

I tried to turn off the regimented parts of my brain but continued to play very little and ask “was that okay?” after every piece.  When the responses were “whatever that is you’re doing, it works!  Just play whatever you feel like!” I realized that I should stop thinking about what I think they want to hear, and start playing what I think would sound good at that moment in time.  And then LET GO, what a concept.  So I played some improvised lines on a Phrygian scale for the dancer whose snake was in fact live.  I threw in a couple Balkan songs I learned from my roommate.  I added color in other places by using my ear and playing what I felt, and it felt great.  What a concept. 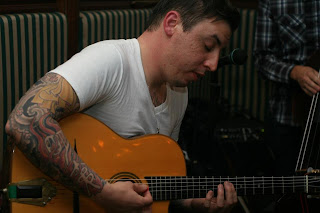 Then I was invited by my friend Aaron at work to sit in with his gypsy jazz group, Trio Gadjo.  I expressed that I needed to work on improvisation and Aaron said "well you just have to do it.  The first time you improvise you'll totally suck. But then the next time you won't suck as bad, and then you'll be mediocre, etc."  He sent me some charts that I promptly put off looking at because I knew I was going to have to transpose(!) and memorize(!) them.  I finally committed to a specific date to go play so I had a deadline to aim for.
I learned a handful of tunes, found some recordings, and practiced along with the accompaniment on my new Real Book app.  I arrived at the Ritual Tavern alone feeling kind of prepared, kind of memorized and kind of confident.  Definitely not totally ready.  Aaron called me up right away and I didn’t decline when they offered me a music stand.  It felt a little less scary to have the charts in front of me (especially to remind me of the chord progressions) but I knew the tunes enough look up and make eye contact with the guys.  Gypsy jazz is intimidating to me because the melodies are fairly short and then it's all about soloing.  But man it was fun and what a great group to play with!  Turns out "not totally ready" is still better than not playing at all.  I went back a second night and even forgot to bring my charts, but I did just fine.  What a great experience for me to play new tunes with new people and just put myself it out there.  Jamming really is a muscle that needs to be exercised.


Then I had the opportunity to jam with two of my favorite musicians, singer Debbi Ebert and pianist/saxophonist Richard Abraham.  These two are the most talented and versatile cats I know, and they also happen to be my aunt and uncle.  Every time we go see them perform somewhere they ask "did you bring your axe??" and I never did because I was too afraid to sit in.  Well I've been stretching that jamming muscle and decided it was a great opportunity for more exercise.  Even my sister jumped up to sing and we jammed on one of our Schmitz Sister favs, "It Don't Mean a Thing."  We played one or two more and I sounded alright and had fun.  My uncle taught me how to signal to the accompanist what key you want without shouting: you hold a number of fingers pointing up for sharps or down for flats (2 fingers up for D, 3 fingers down for Eb, etc). What a fun family jam.

It sounds like the lessons here are to keep practicing, playing, doing, creating, putting yourself out there as much as possible.  That's the only way it gets easier.  You'll never be totally ready.  Let go and don't be held back by expectations of perfection.  It's too hard to take a first step if you're afraid that you won't be good, especially because you definitely won't be good.  But then you will be.  And no matter what, it's so much fun in the process.
Posted by Stefanie at 12:00 AM