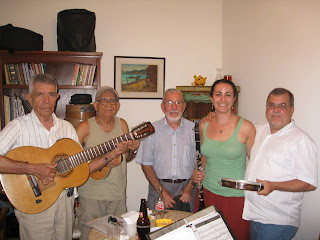 Carnaval was definitely in the air in the Cidade Maravilhosa in January. I got to see the samba school São Clemente rehearse in their quadra and saw Unidos da Tijuca parade in the street in the middle of a flood. I drummed with the blocos Bangalafumenga and Monogato again and worked on my caixa playing with my teacher Nico. I played my clarinet in a bunch of rodas de choro and sat in on some friends' gigs. I heard amazing instrumental music including heavy hitters in choro like Hamilton de Holanda, Yamandu Costa, Daniela Spielman and Zé Paulo Becker. And I got to hang out and learn from wonderful clarinetist Rui Alvim. The most special moment from my time in Rio was visiting my friends in the group Choro Na Veia. I met my friend Marino last year at a roda de choro and he was so kind to invite me into his home to participate in their weekly choro rehearsal (post from last year here). I was enamored by this group of musicians and honored to participate in their weekly ritual. I arrived this time a year later, so much looking forward to seeing them again. Marino and Ivan knew I was coming and greeted me warmly. The three older men however each shook my hand and said “muito prazer.” My heart sunk. They didn’t remember me! Marino explained that I’m the American girl who had played with them a couple of times last year. They all nodded but didn’t seem to register. 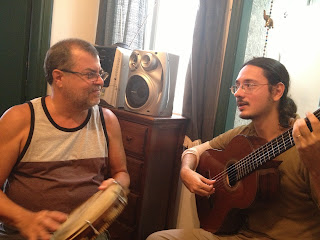 Seu Barretinho do Imperial Marinheiro is the 89 year old former-navy mandolin player whose compositions are played by the group. Last year he said he had composed 1,006 choros so far in his lifetime. This time the number he gave was 1,507. Either he was very busy in the last year or that number has shifted a bit. In any case, it’s quite a repertoire of choros and they are all lovely. Since he was a child he would go out in a sailboat alone with his mandolin and “receive” melodies from above that he would then write down. The group puts chords to his melodies and the guitarist Ivan notates them on the computer. I was honored to receive a few of them from Ivan via email last year and I introduced them to my group Choro Sotaque. Because Seu Barretinho had forgot about my previous visit, he was so surprised when he heard me play one of his melodies. It was fun taking turns playing each section with him and seeing him smile. As we played more, it was clear that they remembered me after all and we exchanged memories from my last visit. 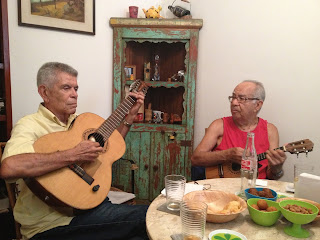 I asked them later on if they would like to see a video of my group playing one of his compositions. They all crowded around my iPhone and watched Choro Sotaque playing “Meu Amigo Urbano,” which is dedicated of course to Urbano, the 83 year old Converse-wearing cavaco player. . Urbano heard me introduce the piece in the video and exclaimed “É meu choro! É meu choro!” They all approved, even of the creative license we took with the meter (except Marino the purist who said that pandeiro shouldn’t be used in a waltz style). In Portuguese Urbano said “You really played that in the United States? Can you believe that everyone? I’m international!” Seu Barretinho was proud that his piece was played in the states. Marino said we did a great job but it would have been even better if we had played "San Marino" which was, of course, the one written for him. 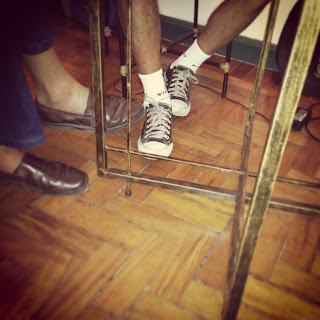 Urbano and I took the elevator together one night and he said that music is what keeps him going. He explained that his wife has Alzheimer’s and that playing choro gives him a reason to live and a reason to be happy. He goes to two rodas de choro every week plus the rehearsal for Choro Na Veia. At the following rehearsal he shared that his wife had gone to the hospital that morning with pneumonia. The others thanked him for his presence at rehearsal despite the stressful day he had had. He explained that of course he showed up to rehearsal because there really isn’t any other way. That we have so much to be grateful for and that God gave us this life to live and be happy. How wonderful for him to be able to be with friends and play music. He toasted his beer and said “isso é a vida boa.” I started to cry, grateful for moments with this amazing sneakers-wearing man, grateful for this musical exchange that I cherish, and grateful that throughout the evening I was able to understand every single word.

Here's a video of Choro Sotaque performing "Meu Amigo Urbano" with a clip at the end of my friends in Choro Na Veia.