Finding the One in Olinda


I’ve been thinking a lot about time and timing in these last few weeks. I’ve been in Brazil less than two months and I’ve seen so many significant events happen. I was here during the day of the Republic, the Dia do Consciencia Negra, Thanksgiving, the Brazilian National Day of the Musician, 12/12/12 at 12:12, Christmas. I got to be in Ceara and Pernambuco during the centennial of Luiz Gonzaga’s birth which was celebrated widely. Five really close friends have gotten engaged since I left and one is expecting a kid. Then Dave Brubeck and Ravi Shankar died. The shooting in Connecticut happened. I’ve felt disconnected despite having been online a lot and I feel like I’m in some kind of time warp where time is fast and slow at the same time. Now I’m contemplating this new year and what 2013 will bring. It will bring my 30th birthday for one, and that’s pretty exciting. And I hope it will bring even more opportunities for adventure and growth on this trip which I am continually grateful for.

December brought me to Olinda and Recife to check out Nordestino music in person, study maracatu, play choro with new friends, and study with Mestre Nininho of Maracatu Badia. I connected with Nininho at camp and when he stayed at my house on tour, so I was excited to get to hang with him and learn more. My friend Derek Wright was in Olinda at the same time working with Nininho and preparing for a big show they’ll do together soon. The two of us stayed around the corner from Nininho in a house rented by a mother and daughter who were artists, musicians, vegetarians, and kindred spirits. Olinda is a beautiful town with lots of great music happening within walking distance, and with Recife just a bus ride away. I got to see great côco, forró, frevo, samba, and of course maracatu everywhere. I also got to visit an Estrela Brilhante rehearsal in Recife with Jorge Martins, one of my all-time favorite Brazil Camp teachers. Some highlights in Olinda included dancing to live côco music on the beach during the a moon, playing choro in the street until 5am on Christmas Eve, and the thundering sound of endless maracatu drums parading through narrow cobble stone streets on Sunday. I liked it so much here that I decided to return in February to see how they do Carnaval in the Northeast.

So back to this issue of time and timing. I always love to contemplate the concept of counting – how people in different musical contexts from different musical backgrounds communicate time. I have quite a bit of experience speaking and translating in different musical “dialects” here in Brazil (in various drum and instrumental communities) and back at home (wind ensembles to pep bands to samba schools to drum circles). Something you hear in the US from both Americans and Brazilians in the samba community is to never ask a Brazilian “where’s the 1?” meaning don’t ask where the downbeat is of a particular rhythm or piece. Asking that supposedly marks you as a gringo and a square. Reasons include: “Brazilians don’t need to know where the 1 is, they just feel it” or “samba lives on the 2 and 4 so you shouldn’t be worrying about the 1 anyway.”

On the one hand, this concept is kind of neat. It’s so much cooler to have the repique play a call-in to the samba or have the 7-string guitar player do a little bass line lead-in to the choro instead of having some dude go “One, two, ready, go!” I agree that it feels less square. And it’s true that certain syncopated Brazilian claves and patterns skip the downbeat. This is something that makes samba feel like constant forward motion with no beginning or end (and definitely no 1). In addition, this concept appeals conveniently to my sense of gringo shame: “I don’t deserve to play this music and I’ll always be the awkward outsider forever wanting to know where the 1 is. And I’ll never find it!”

On the OTHER hand, this concept is absurd. Any two or more people who want to play music together need to be able to play at the same time. You can’t just play a rhythm out of thin air without giving it a context. Some of the maracatu players here would sing a rhythm to me without counting it out first or at least singing the call-in. Without any context my brain learned the rhythm as if it began on the 1. Hearing it later on in the context of the call-in I learned that it actually began as a pickup note on the second sixteenth note of beat 4. It sounded like a completely different rhythm and I had to retrain my brain! I do think that the Brazilian players have a slight advantage having grown up in this musical environment where certain patterns are just more familiar. But that only goes so far (a series of terrible forró dance partners with no rhythm proved that they are not all born with it). You have to know where you are in relation to the music and to others.

On the THIRD hand, maybe I just need to get over myself. What a liberating idea to not worry about where the 1 is all the time and just give in to the music! Once we added singers to these maracatu beats I’d been learning, the vocals entered in places in the music I wouldn’t have expected. All of a sudden the downbeat didn’t feel like the downbeat anyway. And if the number of beats in the song didn’t match the number of beats in the drums (intentional), we’d come around to the second chorus and the downbeat would be in a totally different place. My part wouldn’t change, but it would sound like a deliciously different part. So in the end, learning all these rhythms shifted and in the “wrong” place actually trained me and my muscle memory to play this stuff a bunch of different ways. How beautiful to let go and let the rhythm be carried by your body instead of your head.

There is an older German drummer and flautist named Klaus Urban who like Derek has come to Olinda for years to perform with Nininho and Maracatu Badia. Nininho gave a couple maracatu charts Klaus had written out using western notation. After hearing this German being described as very strict regarding music, I was impressed but not surprised at how clear and accurate his handwriting was. I was curious to see how he addressed the occasional issue of measures not all adding up to four (yes I’m still counting, I can’t always help it). Instead of cursing the music for not making sense, giving up trying to use western notation to depict it, or using a bunch of different time signature markings, he did the coolest thing. At the end of a measure that had only three beats instead of four, he left it with only three beats in it and drew the next bar line as a dotted line instead. No written explanation needed. What a beautiful way to acknowledge the “idiosyncracies” of the music without having to modify it. 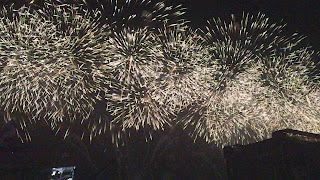 Parabens if you have made it to the end of what turned out to be a long post, and thanks for reading. I’ve now made it safely to Rio when I got to ring in the new year among 2.3 million people in Copacabana under a shower of champagne and breathtaking fireworks. Wishing the best for you in 2013! Please enjoy the video below of the fun 5am choro performance on Christmas Eve.