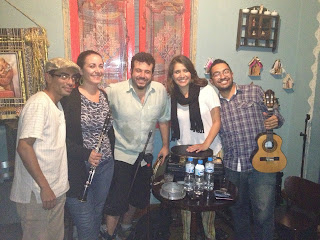 In the last twenty days in Brazil I've been in two different cities/climates/time zones, seen 15 performances, taken eight music workshops, sat in in three rodas, and received seven requests to be my boyfriend and/or husband. It’s been eventful to say the least. My Portuguese is rocking and that's really made a difference in my experience here. However, I have already said some pretty derogatory words for “gay” and “penis” to Halysson’s mom by mistake. What a difference a vowel makes! 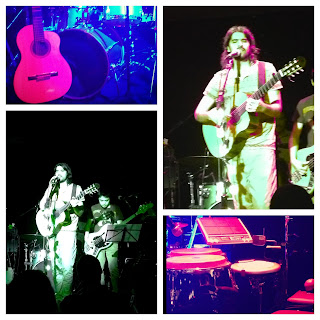 In two weeks I feel like I only scratched the surface of São Paulo, but what I did see I really liked. I didn't do much sightseeing but I got to know a few of the different neighborhoods when checking out different music every night. I saw Alexandre play choro a few times with great musicians like Roberta Valente. I danced to a fabulous forró band Bicho de Pé at Canto da Ema. They have a cool female lead vocalist who played some mad pandeiro too. Halysson's mom and I went a couple times to a neighborhood bar called Zé Carioca to see Halysson's friends' band Fino Trato. They were friendly guys and played a fun mix of pagode, MPB, baião, funk, etc and played some requests for me, the "Brazucamericana." I went with Adriana to Tom Jazz and Casa do Núcleo, a couple of artsy sit down venues that had some great music. I was struck by a composer/performer we saw named Caê Rolfsen. I'm not sure how to describe the mix of rhythms and styles, so I'm going to share one of his tunes below. 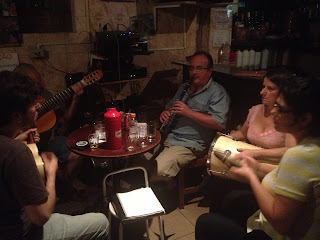 I went to a few rodas de choro in São Paulo as well. At one of them I went up to introduce myself and ask if I could come by again and sit it. Before I could get the full sentence out, I was scolded for not having my instrument on me! Good lesson. I went to another one with clarinetist Stanley Carvalho, this time with my instrument. I asked if I could sit in and they made some space for me. I still don't feel totally welcome in situations like that so I always try to be aware of any subtle cues from the group. I couldn't get a read on Stanley, but he kept having me call tunes and said I shouldn't be embarrassed to look at my charts for some of the songs. So I stayed, and I played with them until after 4am! I joined Stanley and some of the others the next day at their restaurant gig in Vila Madalena. He bought me a beer and had me play in his place when he took a break, so I figured I was doing okay. 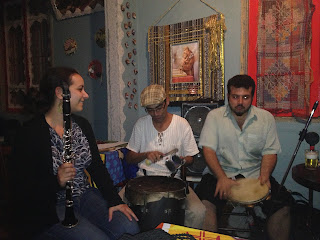 A couple days later, Halysson's sister Thays and I got to see my friend Carla sing beautiful sambas at a venue called Lamparina. What an awesome space - it's a house converted into a restaurant/bar/cultural center. They invited me to sit in on a couple of choro tunes with the band. Good thing I had my instrument.

And then my two week taste of São Paulo ended and I hopped on a plane to Fortaleza. I know I'm not finished with that city yet. Such a rich and diverse music scene which I found to be very accessible. It's a large and fast-paced city (largest one in South America!) with a lot of concrete. Still, it seems to have a very small and connected music world. I saw some musicians perform on one stage, then saw the same people at a party the next night, and then saw them play with different musicians the next. In addition, I had a couple of helpful lessons with Alexandre which helped me a lot and gave me a lot to chew on. I hope to continue working with him when I head back over there. As for now, it's time for the Choro Jazz Festival in Jericoacoara. Tchau!