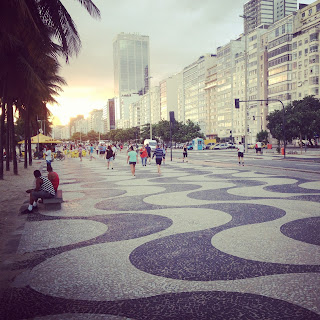 I've been proud of my Portuguese progress these past five months. It’s changed my whole experience here. It feels like second grade when I got glasses for the first time and I could suddenly see a world I didn’t know existed. I can tell my language skills are excellent because I have conversed successfully with a six year old about super-homen and other heroes, I gave directions to a local without being asked where I’m from, I had mini-arguments in the themes of racism and feminism, and I let an old American expat believe that I’m a Brazilian native who happens to speak some English.

I'm loving getting to know this language. I love that the word for shopping cart is "little car" and the word for gate is "big door." I learned an expression for heartache, dor de cotovelo, which literally means "elbow ache." It refers to the pain you feel when sitting down with your elbow on the table and head in your hand, sighing for your broken heart. I also love that in what can sometimes be a pretty macho culture, they have a word for penis like pica which sounds like a small cartoon character. I learned that saideira is your last drink of the night, but is also the last song performed of the night. If you sit in with someone's band you are giving a canja which is literally chicken soup.

When describing someone who plays well, they tend to say "ele toca muito" instead of "ele toca muito bem." I'm sure it's just a shorthand way of speaking, but it literally translates to "he plays a lot" instead of actually saying "he plays really well." I know the intended meaning is a positive compliment, but I always laugh when people are coming up to me to say I did a good job but instead it sounds to me like "Wow, you play so much! Look at all those notes you played!"

I had a great midnight conversation in mostly Portuguese and some English with friends Maria Rosa and Dida
when I asked them to explain the expression "pois é." I still don't think I can translate it completely, but equivalents such as "é isso aí," and "that's how it is" came up. This resulted in Maria Rosa sharing this great video of Damien Rice performing "The Blower's Daughter" that starts with the lyric "And so it is," followed then by Seu Jorge performing his version of the same song called "É isso aí." This particular Damien Rice song also happens to be the unofficial anthem of the year I lived at the International House at UCSD, so I found it a fitting addition to my experience here.

I also love this verb pretender which I haven't quite figured out. I think the closest definition is actually "to intend" but of course to an English speaker it always sounds to me like it means "to pretend." So it always sounds like people are asking me things like "So how long are you pretending to play music in Brazil?" or "Will you pretend to play music professionally when you return to California?"

Speaking of that, my return to California is coming faster than I thought. Ten days from now I'll be on a plane back home. A few days after that I will pretend to play music professionally in my new gig playing clarinet in "Fiddler on the Roof" with the Lambs Players in San Diego. In between all of that I will pretend to turn 30. The adventure continues.
Posted by Stefanie at 2:08 PM