Ode to the Music House

A year and a half ago I left my peaceful one-bedroom cottage and moved into a house full of musicians. It has been a never-dull adventure and I have lots of stories to share. But first, an ode to the people who have lived in the house and inspired me: 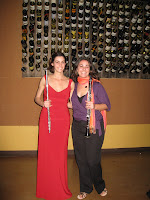 To Rebecca - incredible flute player, singer, composer, and painter whom I thank for the musical direction of my life. Rebecca is the one who encouraged me to move into this crazy house in the first place and is one of the first career musicians I’ve known. I watched her dive headfirst toward her dreams and make things happen for herself. I realized that I wouldn’t be a musician by waiting for someone to knock on my door and give me a gig. When I moved into the house, I loved hearing flute melodies waft out of Rebecca’s room in the morning and improvised vocal lines while she washed dishes. My favorite house moment with Rebecca is when we returned to the jam at my housewarming party wearing only vests like all the guys!

To Ryan - crazy fiddling surfer bro, whom I thank for many sleepless 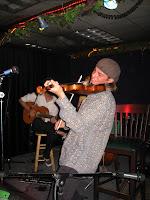 nights. Ryan took the definition of music house to its full potential. If he wasn’t out surfing he was in the house playing all the time. Not only did I learn what a cymbalom is, I had the pleasure of hearing it being tuned for hours a day and hearing it played outside my window at 4am many nights. Ryan introduced me to Balkan music and the value of learning by ear. Even though the tunes he taught me were slightly different each time he taught them, I still know them by heart. After one of my choro gigs, Ryan said “Dude Stef, you are shredding out there and I never even hear you practice!” And I realized he was right: I don’t practice enough. The reason Ryan is so good is that he plays all the time. My favorite house moment with Ryan is accompanying him on cajon in the kitchen as he showed me a new song he had just written that he couldn’t wait to share.

nylon string guitarist, surfer, photographer, most laid back person in existence, I thank for showing me how to relax. Dusty does exactly what he loves and helped me learn that there’s really no reason to do anything else. Sure he takes the occasional soul-stealing-high-paying gig, but he spends the rest of his time being creative or being in the water and that’s why he’s happy. Having known Basilio and lived in the music house on and off throughout his life, Dusty set the tone for the open, creative, communal vibe of the house. He also taught me that the most important element of an improvised solo on my clarinet is rhythm. He said not to worry as much about the notes; pretend I’m just playing a solo on my drum. My favorite house moment with Dusty is our duo in the kitchen with him on cajon and me tap dancing. 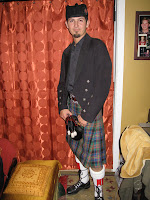 whom I thank for his sense of inquiry, especially when it comes to music. Esteban was an unofficial short-term roommate whose legacy is still visible in the dry erase marker rhythm notation he left on the sliding glass door. Any time he had an urge to learn a conga rhythm or how to play tabla, I would come home to him teaching himself from youtube videos and making notes on the windows. My favorite house moment with Esteban is returning together from Brazil Camp while Basilio’s flamenco fiesta was still going on in the house, and crashing the jam with a big samba entrance on the drums. 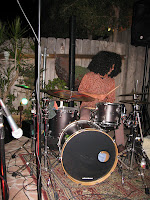 To Julien – phenomenal drummer, guitarist, singer, songwriter whom I thank for my newfound skill to sleep with a live drum set soundtrack. When Rebecca moved out and Julien moved in, the drums became a permanent fixture of the living room furniture. I love playing with Julien; his drumming is so solid, versatile, and nuanced. I feel like I’m both conversing with and supported by this strong, dynamic force behind me. He also writes these beautifully complex songs on guitar, and I love when I’m hanging in the house and I can hear him practicing outside. My favorite house moment with Julien is when he, Claudia, Dusty, and I practiced impromptu body music polyrhythms in the kitchen. 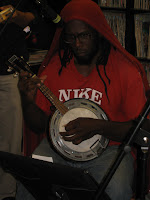 unofficial short-term roommate whom I thank for throwing me at other musicians. Duke prefers composing much more than performing, but he especially likes playing musical matchmaker with musicians he thinks should play together. My favorite moment with Duke is when he stayed in on a Friday night to practice scales and modes with me. He made up an exercise for us to practice in Dorian and ended up composing a full scale swing tune out of it. 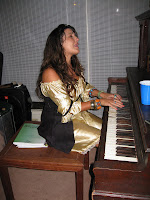 o Natasha – singer/songwriter, painter, gourmet chef whom I thank for inspiring me to always express myself fully and fiercely. Natasha moved here from the Cayman Islands just because she liked our friend Chad’s work and decided to have him produce her new album. After Ryan moved out, Natasha moved in and became my creativity cheerleader and partner in crime. Natasha sings to full capacity with her whole heart, even if she’s just working out song ideas in the living room. I admire her for that – no holding back, no apologies, just pure expression of her true self. Natasha acted as both photographer and inspiring art director for my website photo shoot. My favorite house moment with Natasha is when we practiced improvising in the living room. Instead of focusing on the chords we used metaphors and doodles for inspiration.

Now with Natasha and Dusty now moving out, I’m now the longest standing resident of the house since I moved in. Julien and I hope to keep the magic of the music house going, and we think the two new additions will fit in just fine. Zach is a bass player who plays ragtime at a speakeasy bar downtown with his identical twin brother. Catherine is a drummer who lived in Brazil for a year and is currently working on recording her own angry girl poems accompanied by her vibraphone. I can just see it now – drums, bass, vibes, and tap! The music house lives on. 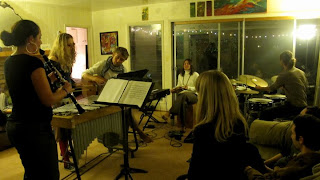